The State of Policing in America Reported by MSNBC

The State of Policing in America Reported by MSNBC 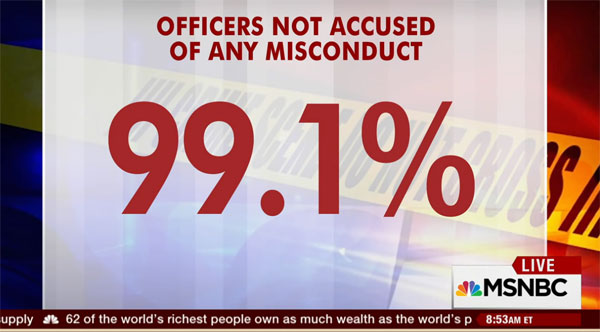 Most of us get up in the morning. go about our days and never think about our local law enforcement officers, unless we hear another negative story on the news.  There is a perception that there are a lot of bad cops out there.  However the reality is that 99.1% of Law Enforcement officers are NOT accused of any misconduct of any kind.

In 2015, 965 civilians were fatally shot by officers, this kind of situation gets the media’s attention, understandably. However, it is important to realize that the media is reporting on less than 1% of all law enforcement interactions in a given year. What about the 99.1% of law enforcement interactions that take place without incident?  We don’t hear about those, so let’s look at some interesting statistics.