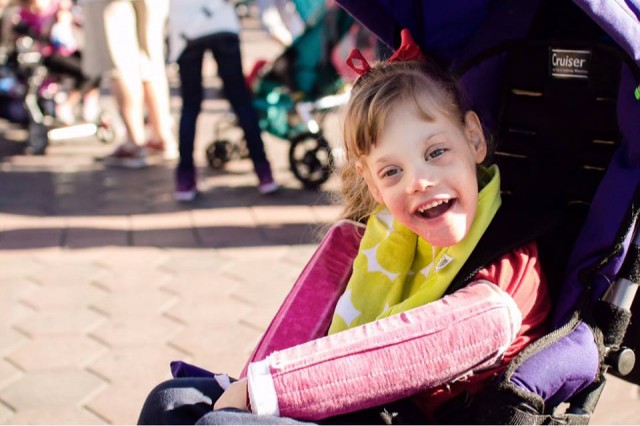 You hear the term, “Superhero” tossed around a lot these days. But, it isn’t often you hear of a whole family of superheroes. That’s exactly what The Wonderlys are. High school sweethearts and married for eight years, Darren and Kati’s lives were forever changed when their oldest daughter Kimber was born with Lissencephaly, a rare neurological condition in which the brain is smooth. Due to Lissencephaly, Kimber functions at about a 3 -5 month old level. She also struggles with seizures that are currently managed effectively with medication.

Since birth Kimber has continually thrived. God knew what He was doing when He blessed Darren and Kati with her. No other parents could selflessly provide for her the way they do; day after day, year after year. They both take turns visiting the “Gym” (physical therapy) with Kimber, up to six sessions a week, since Kimber was six months old. They also share the traditional baby duties that every parent faces; like diaper changes, feedings, and bottles, rocking, and bathing. However, all of these duties take on new meaning when you’re dealing with the body of a five and a half year-old child that functions at the level of a three month old. Lissencephaly makes it very difficult for Kimber to control her movements, so everything is done in a quick, full-throttle fashion. This makes feeding her particularly interesting! I’m quite certain she thinks it’s hilarious when she breaks an arm free and her food goes flying. Her muscles remain in a state of contraction most of the time she’s awake, so she is incredibly strong. Remember what I said about superhero? Yea, she rivals any Marvel character with the strength she packs! Since she is unable to sit up, she requires a special lounge chair in the bathtub. But the lounger wasn’t always around. Before this Kati would get in the bath with Kimber to ensure she was bathed safely. This included getting in a cold bath when Kimber got a fever, which is still fairly often. I’m pretty sure Mrs. Incredible wouldn’t even endure that.

Kimber’s favorite color is purple, so it’s fitting that her specialized stroller is purple too. And who better to escort her around than her little brother Gavin? This 4 year-old is best described as Captain America, Jr. No brother could be more proud or more protective of his, “Sissy” than the youngest Wonderly. Since he was old enough to entertain himself, he’s been entertaining his big sister. He even helps Mom do Sissy’s hair! Kimber participated in League of Dream’s baseball season this year. Gavin was at every game, of course, pushing his sister around the bases.

If there’s any reason to compare Gavin to Captain America, it’s because his dad IS Captain America. Darren’s coworkers gave him this nickname several years ago. He is strong, assertive, and proactive, with a go get ‘em attitude. He’s been wrapped around Kimber’s finger since the minute she was born. Nothing is more heartwarming than watching him care for his only daughter.

Through these past five and a half years there have been highs and lows for this superhero family, but you would never know it. Darren and Kati are the last people on Earth you would ever hear complain of their situation. Only immediate family and close friends know the hardships they have faced and continue to face. They choose to share the highlights reel of their life together; the way Kimber makes eye contact with them and smiles, how she laughs when they play peek-a-boo with her, and how Gavin is so considerate of his big sister and attentive to her needs. They choose not to share the ins and outs of their everyday lives. The parts that would break the rest of us. The medical appointments, tests, meetings, phone calls, insurance battles, and time consuming therapies like stimulating Kimber’s nerves every 90 minutes with a small brush. It’s an active choice they make to not complain. A choice that most of us, with healthy children, don’t even consider. And to top it all off, Kati and Darren both work in public service, guiding the rest of us through our lives. Superheroes indeed.

For More Photos from the event, please go to our FB page