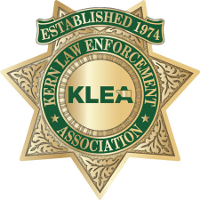 KLEA President Marc Haiungs had the honor of delivering a $5,000 check from the Kern Law Enforcement Association to Gary Welfl of Brady’s Market as reward for the information he provided that led to the demise of accused murderer, kidnapper, and attempted murderer of two Sheriff’s Deputies, Benjamin Ashley. Also present were Sheriff’s Commanders Drake Massey (left) and Tyson Davis (right).
Video credit to Drew O’Connell.